Play the most popular NAMCO classic titles anytime, anywhere on the Nintendo Switch™!
Enjoy the games such as PAC-MAN™, Galaga™, Splatterhouse™ and more!

Back in 2010, in commemoration of the 30th anniversary of “Pac-Man,” a world renowned title, which garnered multiple awards and accolades, was released as the frontrunner to the “Namco Generation” series of games – “Pac-Man Championship Edition DX.”
Following in its footsteps and in honor of Galaga’s 30th anniversary, an innovative and evolutionary game has arrived! The game – Galaga Legions DX! 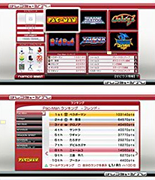