A second in space shooters where the player pilots a spacefighter to face the Galaga forces. The game appeared as a successor to Galaxian in 1981, and became a masterpiece which would go on to become a long seller.

How to Play (Controls)

The player uses the control stick to move the spacefighter to the left and right, and presses the button to shoot its cannon.
Up to 2 shots can be fired on screen. 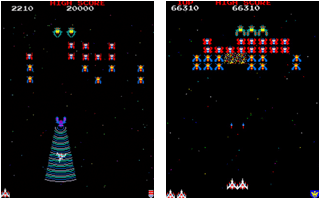 The enemy alien Galaga attacks in a formation firing Charged Particle Cannons. At the beginning of a stage, the Galaga formation flies into the screen. Each stage features about 40 enemy units in a formation. Defeating as many of them before they finish their formation is key in getting an advantage in battle. The Galaga forces are comprised of 3 types of enemies – Bosses, Guards, and Grunts. As the stage progresses, the enemies start showing various flight patterns and special formation attacks. The Boss Galaga is able to use a tractor beam that can capture the player’s spacefighter.

- The game maintained its popularity for over 4 years across many game arcades. This was a feat back then, and this longevity proved that the game was a well-received masterpiece.
- The various Challenging Stages and game features were well-designed so that the more a player played the game, the more they can enjoy the depth that the game provides.
- The game made its way to various other platforms, such as home consoles, hobby PCs, and more.