A space shooter where the player becomes the pilot to the spacefighter, Galaxip, to face the enemy alien forces. The commemorative first game release among the series.

How to Play (Controls)

The player uses the control stick to move the Galaxip to the left and right, and presses the button to shoot beams. The beams can’t be fired in succession until the one shot before disappears from the screen, so precision is needed when shooting. 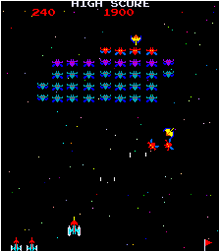 The Boss Aliens (Galboss) are special aliens that act as leaders and only 2 are found in an enemy formation. The Boss Aliens are accompanied by Red Aliens making them difficult to defeat, but in turn, a player could get more points from them. When a Boss Alien is defeated, the enemies stop attacking momentarily, giving the player a chance to retaliate.

- Namco’s (current, Bandai Namco Entertainment) first shooter video game.
- After years of research and development, the hardware (circuit board) for the game was created, bringing about visual qualities unlike any before.
- All the colorful characters, smooth movements, sound and background ambiance offered a new experience, and upon its release in game arcades, it became an instant hit.
- Galaxian became an inspirational pioneer to another benchmark title to come.